JioPhone NEXT announced, will be the world’s cheapest smartphone, made with Google.

by CHETAN THATHERA
in Technology 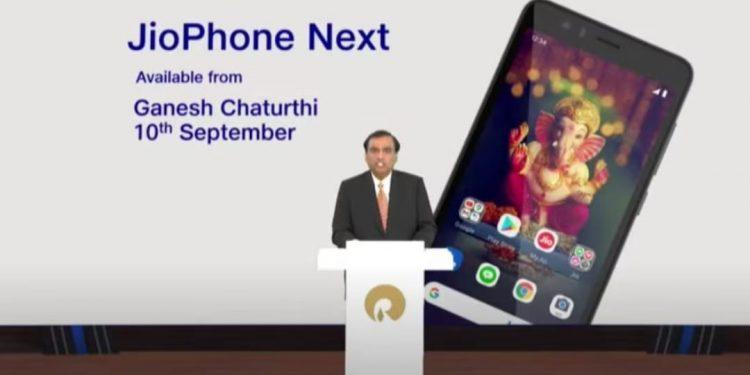 During the 44th Annual General Meeting of Reliance Industries, the company’s chairman Mukesh Ambani launched the new Jio Phone NEXT smartphone in partnership with Google. During the AGM, Mukesh Ambani said that Jio is the cheapest 4G service in the world.

Jio Phone NEXT is a feature smartphone in which Google and Jio’s applications will be available. Play Store will also be open from where users will be able to download the app. Voice assistant and language translation feature will be available in JioPhone NEXT.

Jio Phone Next will be available in the market from September 10. JioPhone will be the cheapest smartphone ever, not just in India but also in the world. Google CEO Sundar Pichai also took a virtual part in this event.

Last year, Reliance Jio announced a partnership with Google. Google CEO Sundar Pichai said about the new smartphone, “Our next step begins with a new, affordable Jio smartphone in collaboration with Google and Jio. It is built for India and will open up new possibilities for millions of new users experiencing the Internet for the first time. A new 5G partnership between Google Cloud and Jio will help connect over a billion Indians to faster Internet and will lay the foundation for India’s next phase of digitization.”

Sundar Pichai has said that along with Jio, and he has specially designed the smartphone in collaboration with Google. It will get the latest Android updates. This smartphone is made for India only, and this device will be launched in the year itself.

According to Mukesh Ambani, data centers have also been built in collaboration with Google and Microsoft. As far as the camera given in the smartphone is concerned, Sundar Pichai has said that its camera will also be great.

The operating system of this Android-based smartphone has been developed jointly by Jio and Google. Many such features will be given in this smartphone which is an expensive smartphone. Although it has not been told how the phone will be

Although the prices of JioPhone-Next have not been disclosed, experts believe that its price will be kept very low.

Join-Google’s Android-based smartphone JioPhone-Next will prove to be a game-changer. This can change the lives of 300 million people who still have 2G mobile sets in their hands. Based on fast speed, sound operating system, and affordable price, the new smartphone of Jio-Google can fill Reliance Jio’s bag with crores of new customers.

Microsoft will soon release the stable version of Windows 11; sign up with these six easy steps.